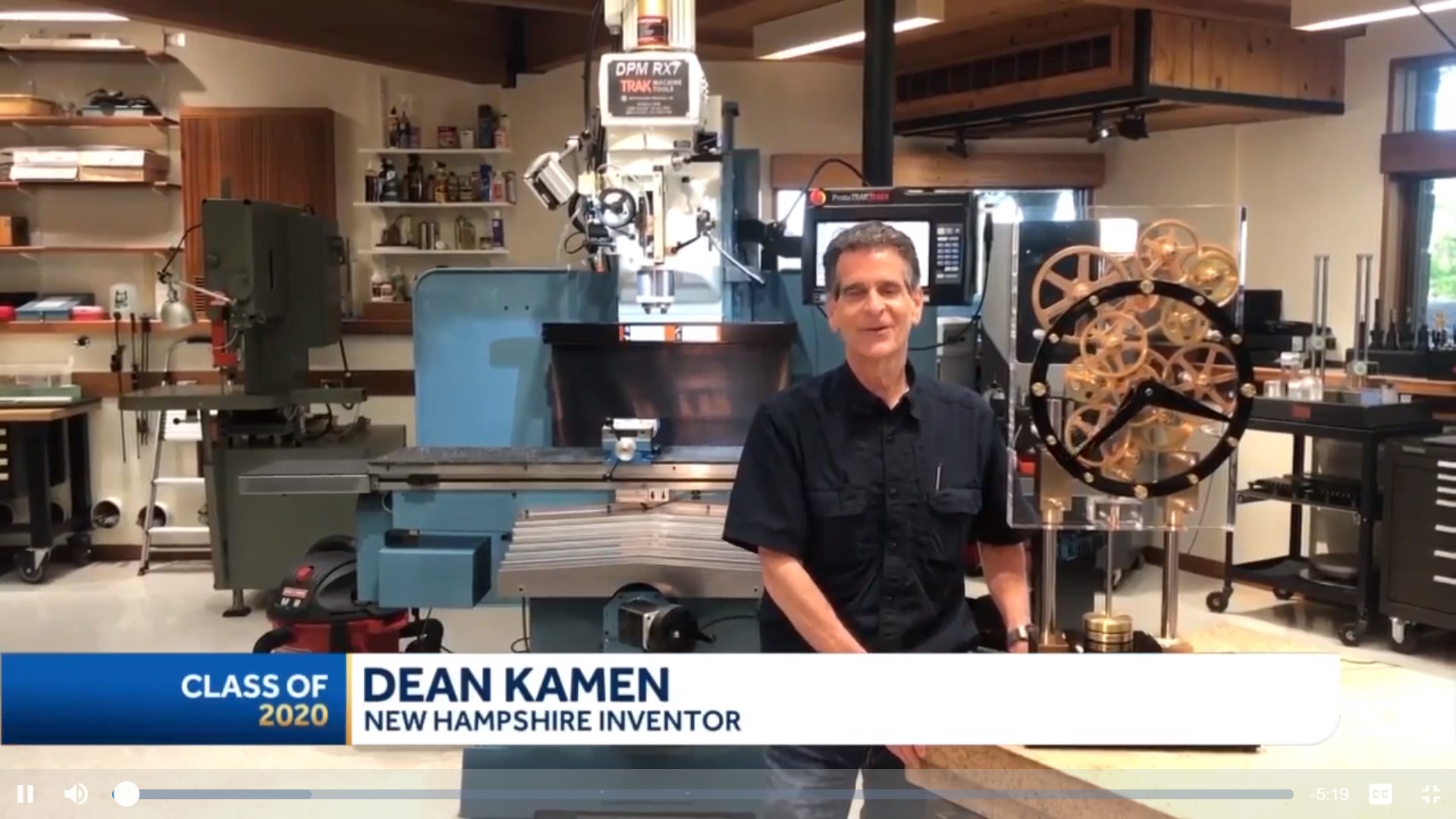 Kamen opened his talk standing next to a clock he specially designed as a trophy to the winning FIRST Team. The clock is not an ordinary clock. He has designed it so the hands go forward faster than they should and then periodically go backward, and it keeps perfect time. He uses this to teach the students that when they make mistakes or face adversity, they will feel like they are moving backward. But then they should stop and see what they learned and try again.

“Sometimes in life you take one step backward so you can take two steps forward,” Kamen said.

He reminded the students, and really all of us watching, to think about what we are learning right now during this COVID-19 crisis and apply those lessons to the opportunities that are going to emerge.

In my article Learning from the Pivots Around Us, I wrote about how many innovations emerge when the inventors have to take a step back and then move forward. Here are four examples from that article.

Avon Cosmetics. Most of you know the cosmetic brand Avon. Avon, which started as the California Perfume Company, is one of the earliest network marketing businesses. It was started by David H. McConnell, a door-to-door book salesman, in the 1880s. To get himself in the door of a stranger’s home, McConnell offered a free sample of a perfume he invented that was appealing to the woman of the house. Once inside he sold his books and left free perfume samples with the books they purchased. Over time when he revisited the homes, he found the women wanted to buy his perfume, not his books. So he pivoted and expanded his perfumes and cosmetics. The story of how McConnell later began selling dealer opportunities to women around the country is fascinating and a good example of having to take one step backward to take many steps forward.

Wrigley’s Chewing Gum. William Wrigley Jr., the son of a soap businessman, moved from Philadelphia to Chicago in 1891. There he started selling his father’s soap to area retail merchants. As an incentive to put soap on their shelves Wrigley gave away products like baking powder. However, like the Avon story, the merchants wanted more baking soda and less soap.

Levi Strauss. The riveted Levi jeans many of us wear now were invented and patented during the California Gold Rush. Tons of canvas fabric to make tents for miners was brought to California via ship by the successful merchant Levi Strauss. Because of the plentiful supply of lumber, fewer and fewer tents were needed. This was his step backward. As the story goes, a woman asked Levi Strauss if he had a stronger fabric for her to make pants for her husband. Strauss gave her the canvas. Word traveled about its sturdiness and Strauss “pivoted” into the jeans business, and took “many, many steps forward”.

YouTube. Today YouTube is the second most visited site every day behind Google. It is there we can find videos on just about anything we need. However, the goal when it was first developed in 2005 was for use as a video dating site. The inventors were disappointed with the slow adoption of using it for dating and took a step backward. But then they were surprised to see users uploading many other types of videos. They recognized this opportunity and “pivoted” into the huge site we all use every day now – now that is a “huge step forward”.

So, as each of us take our own one step back right now, let us remember Dean Kamen’s advice and look for ways to learn so we can take our own two steps forward.

Steve Wood is the President and Chief Executive Officer (CEO) Work Opportunities Unlimited Inc. In addition, Steve provides strategic planning and organizational development consulting services to clients. Prior to joining the company, Steve spent 17 years in the banking industry where he was promoted to Senior Vice President and Senior Commercial Loan Officer. He consulted with entrepreneurs and managers in the areas of strategic planning and organizational development at a range of businesses throughout New England. Steve was a member of the adjunct faculty team at Southern New Hampshire University (SNHU) from 1994 to 2014. He taught Leadership and Managing Organizational Change re