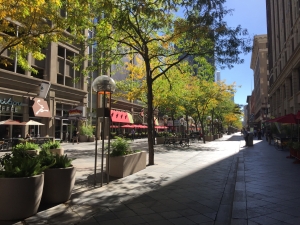 What a weird title for a blog, right? Well, I just spent four great days in Denver, mostly downtown, and I came to realize very quickly that next to restaurants the most common business at street-level was begging. And, if you spend any time watching beggars practice their “craft,” you can see they understand the customer need they are trying to satisfy, the importance of location, and how to deliver a compelling message.

We stayed at a hotel on Curtis Street and frequented the 16th Street Mall every day because it was only a few minutes away. The 16th Street Mall is really a whole street that runs a little over a mile and the only motorized traffic on it are free buses that run both ways. It is a very cool street.

Consumer Need. Begging is successful because people without means or ethical principles understand that a fairly large number of the rest of humankind care about others and “feel” for people who they think are really getting a tough break. Beggars know we want to feel better about ourselves and that giving to them, who are less fortunate, makes some of us feel better.

Location. On most of the heavy-volume corners, like other major cities, there sits or stands someone asking you for money. Since we walked up and down 16th Street often we saw the same people work the same corners every day – they understood the strategic importance of “location, location, location.” Elsewhere we see beggars appearing in groups as they work automobile intersections during morning and afternoon commutes and on heavy traffic holiday weekends, which I understand can be real gold time-slots. The importance of location is not lost on them.

Messaging. We also noticed in Denver that each of the beggars we saw tried to differentiate him/herself from the others by using different messages. One beggar was super friendly, used a big smile, told us he had been hurt in an accident, asked for help, and closed by telling us to have a great day. After he smiled, “have a great day,” I saw several people stop, go back and give him money. Nice technique.

There was a very friendly veteran in a wheelchair. There was fellow with a cute dog. There was a mom and young son. I am sure the successful ones have figured-out what message and appearance works best.

If you think my business analogy is a little cynical, try watching one or more of the videos in the next section.

Charlatans Aplenty.  People have been begging for as long as humans have existed. And, like in other businesses, the begging trade is full of charlatans, who give begging a bad name. Most of the questionable beggars exposed in these television exposés took our money using false messages and costumes and lived rather normal lives.

I choose not to give to beggars and instead donate money and give our time to organizations that help those in need. But on this trip, I must admit, I could not overlook the business of begging – a business I am grateful I don’t have to try.