Feedback is tricky business. For it to work effectively both the receiver and the giver have to be fully engaged. And we have to watch out for how our unconscious self can derail the process. 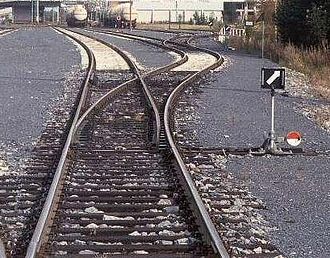 Last week I was introduced to a feedback term called switchtracking on a fairly new podcast called the Hidden Brain (Episode 1, September 2015 ) hosted by Shankar Vedantam. Vedantam is a science correspondant on NPR and usually reports on human behavior and the social sciences.

Switchtracking. The term switchtracking is described by author Sheila Heen as the process most receivers of feedback begin when they hear information about their performance they do not like. They either verbally or silently switch the conversation to what’s wrong with other people rather than face what’s wrong with him/herself.

Like a railroad track, feedback from the giver starts down one track. But if the feedback contains information the receiver is uncomfortable with, the conversation often gets switched to another track. And before you know it the conversation may head down a third track.

“Each of us hears conversations through our own lens,” Heen says.

Here is an example of an exchange that might sound familiar:

Sally (Supervisor): I reviewed your report this morning, Jack, which was a day late. I have several changes I would like you to make today before noon because that is when our customer wants to see it.

Jack: It is a day late because I had to cover Heather’s customer calls yesterday afternoon.

Sally: You have had several days to work on it. Let us now refocus on the changes, Jack.

Jack: But you do not seem to understand that I cannot cover for Heather and get my tasks done, too.

After they review the changes –

Jack (Either says or thinks): I do not think these changes need to be made, I think you are being too picky. I think I did a pretty good job given my time-constraints.

In all these cases the conversation is likely to move down several tracks and may never effectively get back on track.

In the book Thanks for the Feedback: The Science and Art of Receiving Feedback, Heen and her co-author husband, Douglas Stone, emphasize the importance of how receivers take-in and process feedback. They write that we spend a great deal of energy trying to help givers of feedback do so effectively but virtually no time on teaching us how to take-in and process feedback. 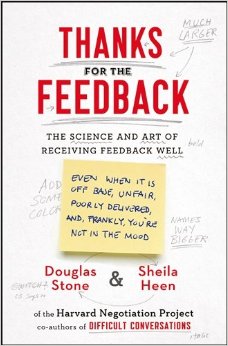 If you want some quick insights into receiving feedback or coaching others on how to receive feedback I suggest reading this document called A Conversation with Stone and Heen. At the end of the article here is what they say are three tips for “eliciting” useful feedback.

“1. Don’t ask: ‘Do you have any feedback for me?’ Too broad. Too daunting. Instead ask: ‘What’s one thing you see me doing – or failing to do – that’s getting in my own way?’ That lets people know you actually want the feedback, and gives them permission to be honest.

“2. Don’t just tap people you like and who like you – they can’t help you with your edges because they don’t see your edges. You live or work well and easily together. It’s the people we struggle to get along with who are often in a position to offer us something valuable about ourselves. They see our edges because they are so wonderfully adept at provoking them. Asking them about one thing you’re doing that’s getting in the way will not only elicit valuable insight into what you can do to reduce the friction, it will also be a bold step toward improving that relationship.

“3. When you’re really struggling with feedback that seems fundamentally ‘off,’ divide a sheet of paper into two columns and make two lists. On the left, list all the things that are wrong with the feedback. What they are saying isn’t true, it’s unfair, they’re one to talk, when they gave it was inappropriate, how they gave it was pathetically unskilled, why they gave it is suspect. Now on the right make a list of things that might be right about the feedback. Too often we use all that is wrong with the feedback we get to cancel out the possibility that there is anything right about it. Your feedback might be 99% wrong, but that 1% that’s right might be just the insight you need. And once you get good at listening for what’s right, not just what’s wrong, you’ll do that in your conversations themselves more easily – getting curious about what they mean that might be helpful. That’s when you can really accelerate your own learning and improve your relationships.”

In the Hidden Brain podcast Vedantam reminds us of another common switchtracking technique used by feedback receivers in denial – we question the “motives” of the person giving us feedback. He suggests we stop spending energy questioning motives and spend more energy on listening to the advice.

All good advice and I began putting it to good use just today – how about you?