Skip to content
Zappos – Could it be the Wrong Thing for the Right Reason?

Have you experienced this with youth sports? You cluster a bunch of five-year olds together into their first soccer program. You try to teach them the basics. You go to the first “game” against another team of five-year olds. The parents and coaches tell the kids, “We are not keeping score, just go out and have fun.” The game ends and some kids are sad and some are happy. And the happy kids are jumping around saying, “We beat them 10 to 5.” 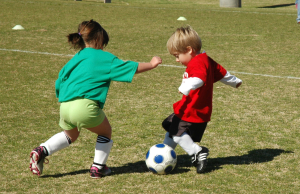 No matter what well-intended rules the parents put in place, the kids know the score. It is just human nature.

A similar philosophy is spreading through organizations today as “enlightened” organizational leaders are trying to create organizational structures without managers; structures that encourage employees to strive for self-actualization and self-management.

The largest and highest profile company trying this right now is Zappos, the highly regarded on-line shoe and clothing retailer. More about Zappos in a moment.

Holacracy. An organization without managers is now commonly called a “Holacracy.” Holacracy has its origins in the word holarchy, which means a hierarchy without a top or bottom. Today some firms have committed themselves to becoming a holacracy and use systems and tools from Brian Robertson’s website Holacracy.

Holacracy is a very complicated system to use in practice. A Holacracy structures roles in the organization in a system of self-organizing circles. Circles are organized hierarchically, and each circle is assigned a clear purpose and accountabilities by its broader circle. However, each circle has the authority to self-organize internally to best achieve its goals.

As one can imagine, the bigger the organization, the more complicated the system as smaller circles or groups of people are connected to each other within a larger circle, which is connected to another circle. Sort of like our universe.

Circles hold their own meetings, select people to fill roles, and are accountable for the work within their authority. Circles are connected by two roles known as a “lead link” and a “rep link”, who sit in the meetings of both their circle and the broader circle to ensure alignment with the broader organization’s mission and strategy. From my reading the most successful Holacracies are those that begin when a firm is in the start-up phase or shortly thereafter when the number of employees is small.

This is why people are watching Tony Hsieh’s Zappos experiment. Zappos, which is now owned by Amazon, has annual sales greater than $1 billion, 1,400 employees, and ships 280,000 orders every week.

After selling Zappos to Amazon in 2009, Hsieh stayed on as its CEO on one condition – he would have total control to lead the organization. Additionally he would collect a modest salary of $35,000 and would have no stock options.

As Zappos grew after 2010, Hsieh became more and more frustrated with how Zappos was becoming more bureaucratic and less flexible and less fun. In 2012 Hsieh met Brian Robertson and became inspired by his Holacracy model. Then Hsieh read Reinventing Organizations by Frederic Laloux and began introducing Laloux’s philosophical “Teal” and Holacracy concepts to all Zappos employees.

Zappos and Holacracy. In March this year, clearly frustrated with the slow speed of Holacracy adoption, Hsieh sent a very long, 4,700 word e-mail to all employees announcing that “as of April 30th, in order to eliminate the legacy management hierarchy, there will be effectively no more people managers.” He went on to offer termination buy-outs for anyone not interested in this new structure. According to a New York Times article, 210 employees or about 14 percent took the offer and left.

After reading a number of sources, including an article by Roger Hodge in the New Republic, here are five things about this Holacracy experiment at Zappos you might find interesting.

While I admit I am drawn to the Holacratic philosophy, I cannot but wonder how it will attract and retain the high-performers. Tony Hsieh is a brilliant entrepreneur with a wonderful personal philosophy of helping each person be the happiest s/he can be. But he is also a multi-millionaire with a penchant for experimenting with human behavior.

So, I wonder if Holacracy can deliver Hsieh’s desired state of nirvana in Zappos or, like my youth soccer example, will it be a set of well-intentioned rules that people see right through. Perhaps it is just the wrong thing to do for the right reason. What do you think?