Skip to content
Is It Our Duty to be Servant Leaders? 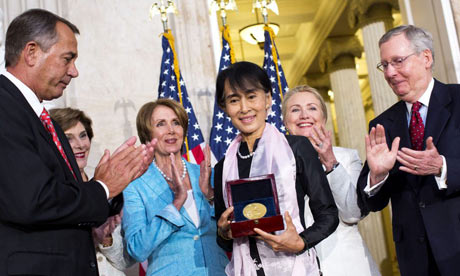 Here is a faraway story you may have missed.

It starts out when a two-year old girl’s father, the leader of Burma, is assassinated. Later in life, with two sons and a husband then in England, she returns to her country to try and help her people get freed from a totalitarian regime. The people tried to elect her as their leader, but the brutal leadership made sure that didn’t happen.

For over 20 years she was either imprisoned or placed under house arrest and couldn’t leave Burma (Myanmar). Her husband developed cancer and died in England – without her. Her sons grew-up – without her. The Nobel Prize Committee had a ceremony to award her the Nobel Peace Prize in 1991 – without her.

Finally, this year, free elections took place and she has been elected to their Parliament and the leader of the opposition party. Having faith, now, in the government she has finally traveled outside her country. This week in Washington she received the Congressional Gold Medal they awarded her in 2008.

She is Aung San Suu Kyi (pronounced “Suki”) and she is a wonderful example of someone who had the courage to sacrifice a great deal for the betterment of a group of people, most of whom she didn’t even know. And what makes this sacrifice even more impressive to me is that she didn’t view it as a sacrifice, she viewed it as her duty.

Sacrifice or Duty. Most of us admire people who have the courage to sacrifice their lives for others. Ms. Suu Kyi admired Ghandi, Nelson Mandela, and Martin Luther King, all of whom made huge personal sacrifices for the betterment of groups of people they mostly didn’t know. Like you, I especially admire the soldiers, police officers, and firefighters&nbsp;who risk their lives in actual life and death situations usually for people they don’t know – and they look at it as their duty, not a sacrifice.

Why do we admire these people so much? First, I think we admire their unselfishness and sense of duty to do what’s right. And, I think we wonder if we would have the courage to do the same in similar situations. I know I would want to have that much courage, but I wonder if I would. I think if I looked at an act as my “duty,” I would do it.

So the question for us is this – when does a sacrifice become a duty?

Duty and Servant Leadership. Most of us are very lucky because we don’t really need to make difficult sacrifices like the ones I’ve mentioned, let alone sacrifices for groups of people we hardly know. Most of the sacrifices we have to make are “time sacrifices” and sometimes we can be pretty selfish about those. How often do we look at “time sacrifices” for the benefit of others as our duty? If you are a leader of a business, organization, or team and you feel a sense of duty to the success and well-being of your teammates, then you may be a “servant leader.” Servant leaders look at themselves first as servants, then as leaders. According to Robert Greenleaf, the inspiration behind Servant Leadership, servant leaders exhibit four, distinct behaviors.