When I heard this afternoon that Tom Brady was suspended for four games, which is equivalent to 90 days for the rest of us working Americans, this confirmed for me that the National Football League (“NFL”) is out of control. I will get back to that in a minute. 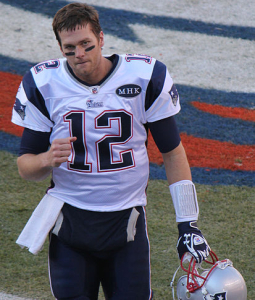 DeflateGate. If you have not been paying attention to this issue because it just, frankly, makes no sense or does not interest you, I completely understand. As a woman colleague said to me recently, “only a bunch of men would make such a big deal out of whether a football was over or under-inflated by a little bit.” (16 percent to be accurate.)

During the AFC Championship game between the Patriots and the Indianapolis Colts someone from the Colts told the referees they believed the Patriots were playing with under-inflated footballs. (Each offensive team plays with their own set of footballs.) The referees did nothing until half-time, when they tested the footballs and made the Patriots switch-out or re-inflate the balls. Some of the balls were found to be at 10.5 psi (pounds per square inch) rather than 12.5 psi. The Patriots led the game 17-7 at half-time and then outscored the Colts 28-0 in the second half. Obviously, a 16 percent difference in ball inflation really did not matter.

The NFL recently completed an exhaustive and expensive investigation. During the investigation attention focused on Tom Brady because many believed the equipment staff reduced the ball pressure to his specifications. The final report concluded Brady was not as cooperative in the investigation as he should have been and he likely had a role in the under-inflation.

NFL Out of Control. The NFL like most professional sports leagues has hundreds, if not thousands, of rules. Just like laws on the books, if no one polices the laws, human behavior adapts on its own. As organizations get larger they have a responsibility to put control systems in place to monitor important rules. I have always said that good control systems protect employees as much as they protect organizations.

Since 2006 when the ball pressure rules changed and the NFL allowed each offensive team to use their own set of balls for their offenses, it appears the control system for checking ball pressure has been virtually non-existent or not noticeable. In fact, the rules were largely changed on purpose to allow quarterbacks like Peyton Manning and Tom Brady to somewhat customize their own sets of footballs to their own preferences. Since then Brady has played in more than 140 games and it appears likely no one has ever questioned the ball pressure before.

Why did the NFL not have a good control system for checking ball air pressure? I think because they know the rule is unimportant. All quarterbacks have their own preferences and each will make subtle adjustments. Quarterbacks do not want the ball too soft because it may not travel through the air very well. They do not want it too hard because it can be hard to grip and catch. And, as the score in the AFC game proved, a 16 percent difference in ball pressure means nothing in the end.

So why the strong reaction now? The NFL says it is only looking out for the “integrity of the game.” Personally, I think this is baloney. I think it is a response to public opinion and part of a strategy to improve the image of Commissioner Roger Goodell and the NFL. They know most NFL fans across the country are tired of the Patriots and are in favor of the league taking strong action against them. Since the Commissioner has been criticized for how he handled penalties in several domestic violence cases, this tough penalty helps him redeem his reputation and that of the NFL.

Tom Brady is not guilty of any serious act here. Yes, he should have cooperated better and been more forthcoming with what his role was. But what he really is guilty of is being on top, of being classy, of being someone others are very jealous of.

However, what the NFL got wrong was using this petty rule violation and Tom Brady as the player they can burn in effigy – it is the NFL itself that is out of control.